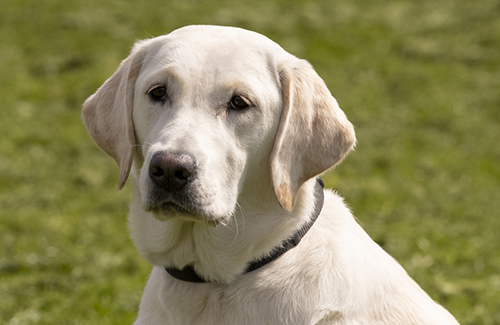 McKenna Brothers are proud sponsors of guide dogs for the blind, below is a update on Eves progress by Eves puppy walkers Ian and Lesley.

We love having Eve as part of our family. One thing puppy walking gives you is new friends as so many people want to talk to you when you have a dog. It gives us so much happiness knowing we are a part of Eve’s journey to change the life of someone living with sight loss.

Eve was a little diva at first, always wanting to get her own way, but now she has become calmer and her patience has improved greatly. She has grown into such an affectionate and loving dog who never fails to make us smile!

Our other trainee guide dog, Ollie, has taken on the role of Eve’s ‘big brother’. They love playing tug of war together and Ollie often drags Eve around on the end of his rope toy!
Mastering skills

Eve loves her puppy classes and has come on leaps and bounds in her obedience skills. She’s very good at the ‘stand’ command, which will be very valuable to her future owner when they want to put her harness on.

Alongside our Puppy Training Supervisor, Heath, we’ve also taught her ‘chin rest’ in which she rests her chin on your hand and waits patiently. This is a very useful command to use for checking her ears, eyes and teeth and will ensure her future owner can carry out regular health checks on her.
The big wide world

We have continued to expose Eve to lots of new environments to build her confidence. Eve isn’t fazed by large crowds of people, a valuable trait for any future guide dog. We often take her to big shopping centres and busy train platforms and she takes it all in her stride.

We recently took Eve on a family trip to Norfolk where she experienced going on a boat for the first time. She was so well behaved, even ignoring the ducks which is no easy feat for any young dog!
Future challenges

Over the next few months we’ll be working on improving Eve’s ability to ignore food scraps and smells. She is always on the lookout for something tasty and so she doesn’t look where she is going. I’m confident she will overcome this challenge in the coming months.

Thank you so much for sponsoring Eve.